Spain consistently ranks at the top of lists of the world’s leading MICE destinations. It is a country rich in culture and history. It is also a country with a deep inventory of unique venues, up-to-date meeting facilities and outstanding hotels as well as a great gastronomy and drink scene. Easy to get to and easy to work in, its major cities, especially Madrid and Barcelona, are popular hosts of conventions, conferences and incentive travel programs. But there’s much more to Spain. So, while we wait to #meetagain, explore the list below and be inspired by all that it offers. 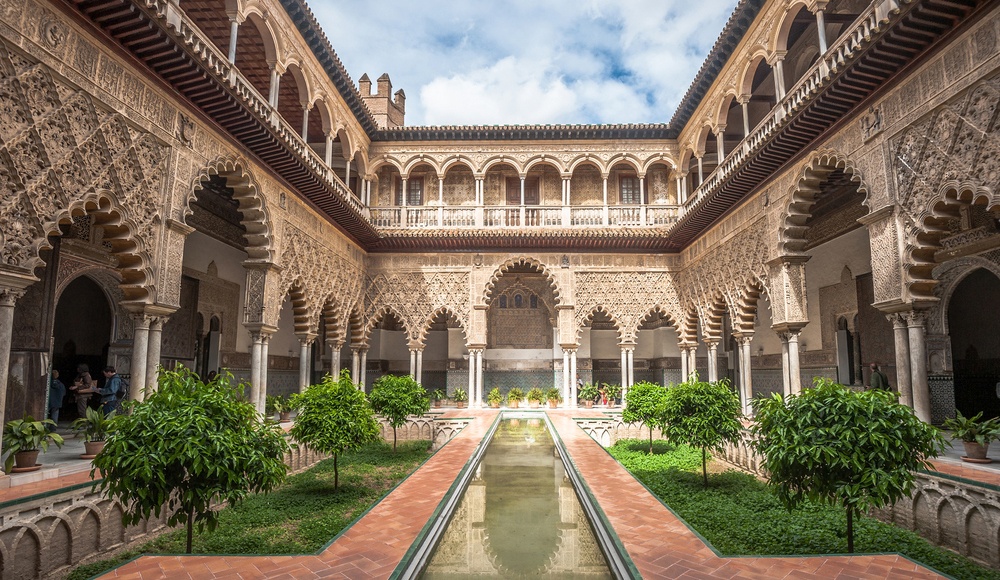 Cultivation of the gardens in the Alcazar of Seville began more than 1,000 years ago. Spread over 31 spaces, they now contain more than 21,000 plants representing 178 species.

Spain’s diverse history and culture are reflected in its architecture. Romanesque, Gothic, Mudéjar, Colonial, Baroque, Neoclassical, Modernist and other schools of architecture are represented—and often combined—in buildings across the country. Many of these have been designated UNESCO World Heritage Sites—Spain has the third highest number of designated sites in the world. As a result, the country offers planners a wealth of extraordinary event environments that will wow program participants. Take, for example, the Real Alcázar Palace in Seville (shown above). Located in the city’s centre, the construction of this Royal Palace was begun by the Moors and completed by the Catholic Kings of Spain centuries later. Today, its beautiful gardens can host cocktail receptions for up to 600 guests, and its four indoor meeting and event spaces can accommodate up to 300 guests. Looking for something more avant-garde? Try Casa Mila in Barcelona. Designed by Antoni Gaudi, one of the founders of the Catalan Modernist movement, it has spaces suitable for groups of up to 250 people. The building’s sinuous lines, organic shapes and other Modernist design elements are marvels of innovation and creativity. 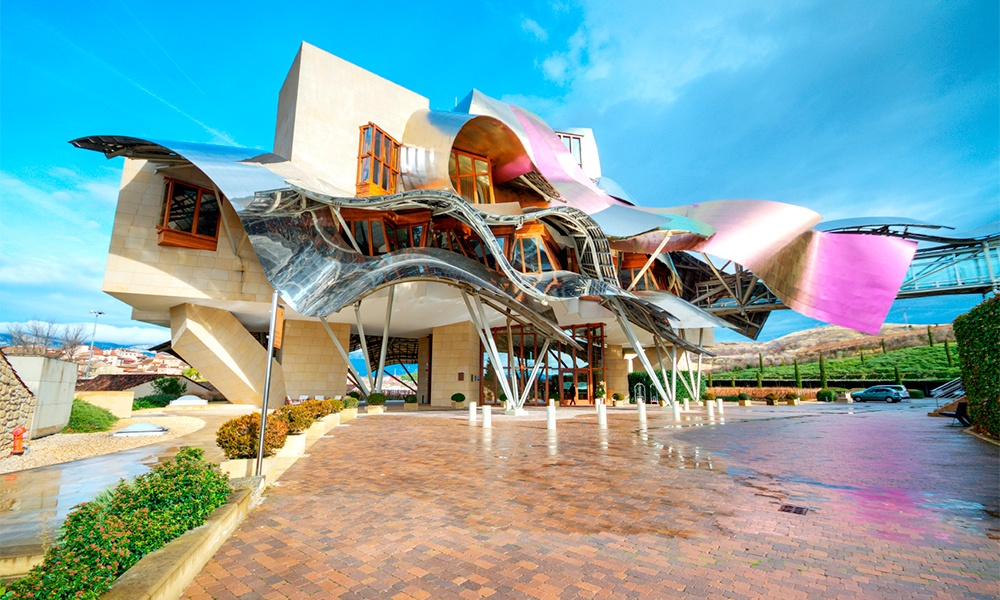 According to architect Frank Gehry, the flowing titanium panels on the exterior of the City of Wine Marques de Riscal Hotel represent the colours of wine (pink to burgundy) and the silver foil and gold mesh used to top the winery’s bottles.

The roots of Spain’s wine culture are so deep that no one really knows how viticulture began on the Iberian Peninsula. Today, Spain is the third-largest wine producer in the world, with “wine routes” traversing the entire country. These routes are dotted with noteworthy places to sample the country’s famous riojas, cavas (sparkling wine), sherries and more. You could start in Elciego, a town in the Alavesa region of the Basque North Country that is home to the spectacular Marqués de Riscal City of Wine. In operation since 1858, it offers an immersive experience that includes a Frank Gehry-designed château style hotel (Hotel Marqués de Riscal, a Luxury Collection Hotel), a vinotherapy spa, a Michelin-star restaurant and The Cathedral, one of the world’s finest collections of old wines. It also has five event rooms, the largest of which can accommodate up to 500 guests. Equally remarkable is Caves Codorníu in Barcelona. The Codorníu family has been producing wine for more than 450 years. Now visitors can explore the company’s history and wines in a Modernist building—The Cathedral of Cava—created by Josep Puig I Cadafalch, who along with Gaudi was a leader of Catalan Art Nouveau architecture. 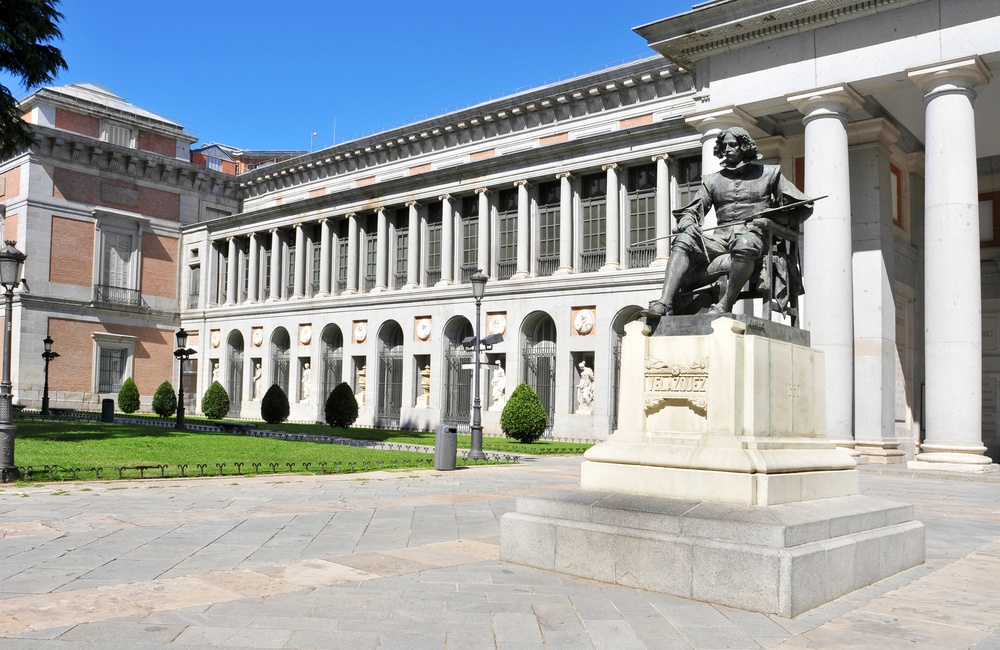 A statue of Diego de Velazquez fronts the main entrance to the Prado Museum. Velazquez was the most important Spanish painter of the 17th century and is viewed as one of the world’s greatest artists.

There are more than 1,500 museums in Spain, ranging from the esoteric (Melon Museum) and the ordinary (Museum of Salt and Pepper Shakers) to the world-renowned. Madrid is home to two museums that fall into the latter category: Museo del Prado and Thyssen-Bornemisza Museo Nacional. Inaugurated in 1819, the Prado’s 20,000-plus piece collection includes works by great artists from all ages including Titian, Raphael, Botticelli, Caravaggio, Goya, Hieronymous Bosch and more. In addition to dedicated meeting rooms (conference hall, theatre, etc.), groups can hold events in several unique spaces such as the lobby that connects the museum’s two buildings, the Hall of Muses, and rooms housing permanent collections. Not far away, the smaller but equally illustrious Thyssen-Bornemisza is home to one of the greatest art collections in the world. Works by Rembrandt, Renoir, Monet, Van Gogh, Lichtenstein, Hockney, Hopper and other masters fill its galleries. It also has several spaces, indoor and out, that are ideal settings for MICE events. These include the lobby of its temporary exhibition space, the Central Hall, The Terrace and the beautiful Upper Balcony, perfect for receptions under the Madrid sky.

Castles | Getting the Royal Treatment 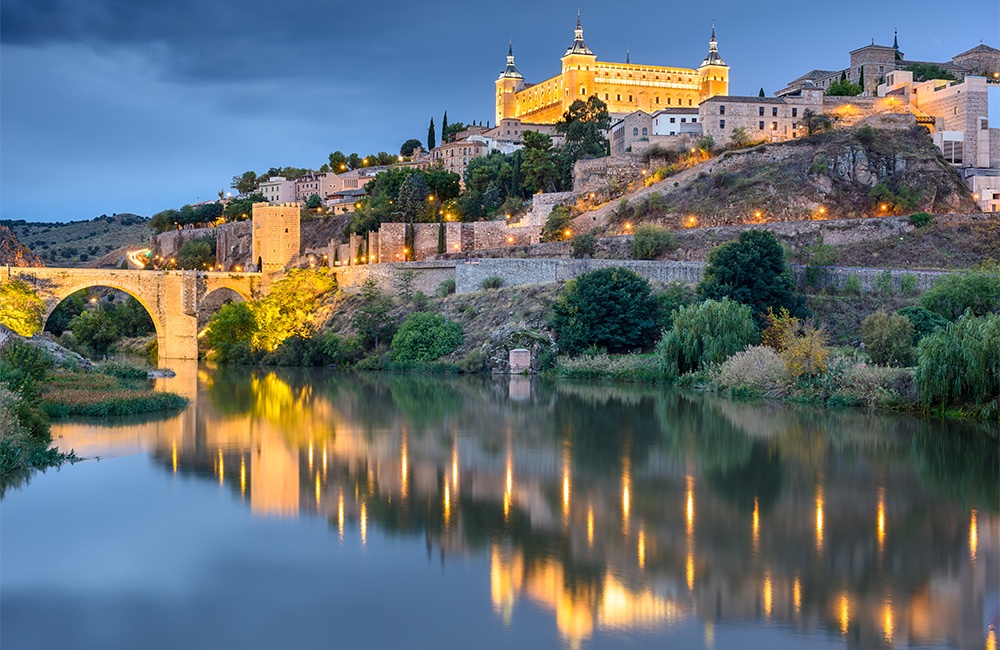 While the Alcazar of Toledo dates back to the 10th century, most of it was rebuilt or restored after the Spanish Civil War ended in 1939.

Spain has some 2,500 castles or alcázars spread throughout the country. Built as fortresses as well as royal homes, several of these historic sites can now be used for meetings, receptions, dinners and galas. For example, there is The Alcazar Fortress of Toledo. With a history that dates to Roman times, it sits on that city’s highest hill and is the first example of a square fortress with towers on each corner. Now serving as Spain’s Army Museum, it has indoor (temporary exhibition halls, reception areas) and outdoor spaces such as the Courtyard of Carlos V available for groups to rent. Offshore—the Balearic Islands in the Mediterranean and the Canary Islands off the west coast of Africa are part of Spain too—Bellver Castle overlooks the city of Palma on the island Majorca. Its circular floor plan with four towers marking the north, south, east and west points of the compass was unique for its time and it remains one of only a few circular castles in Europe. Today, planners can make use of several outdoor spaces (the courtyard, the first-floor gallery, etc.) and the indoor chapel and conference room, delivering history as well as a breath-taking view to participants. 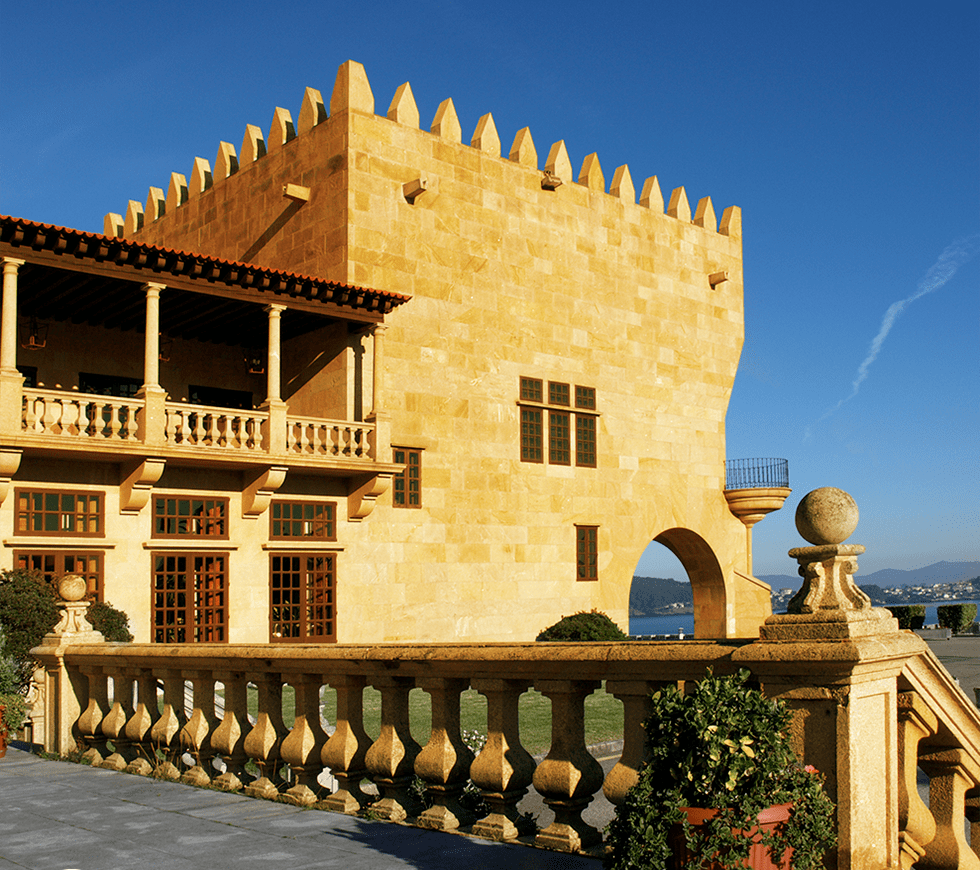 The 122-key Parador of Baiona on Spain’s Atlantic coast was built in the style of a Galician manor house within the walls of a medieval fortress.

Spain’s network of state-run luxury hotels—paradores—provides planners with an array of unique accommodation options. The network’s 97 properties are housed in restored castles, monasteries, convents, fortresses, manor houses, palaces and some outstanding modern buildings, all of which deliver an authentic experience in some of the country’s most exceptional settings. For instance, there is the five-star Parador de Santiago de Compostela. Considered the oldest hotel in the world, it was built in 1499 as a royal hospital for pilgrims travelling to Santiago, which is the endpoint for several pilgrimage routes (Caminos). Today it offers beautiful cloisters, 137 elegant guestrooms and a fine dining restaurant. Or, just 55 minutes from Madrid, there is the Parador of La Granja. Sitting at the foot of the Sierra de Guadarrama mountains in central Spain, this four-star, 127-key property started life as a royal residence built in the 18th century. In more recent times, a conference and convention center has been added, and it now boasts 16 meeting rooms with the capacity for 600 guests. If you’re looking for something more contemporary, the Parador de Cádiz is worth checking out. While Cádiz is one of the oldest continuously inhabited cities in Western Europe, its Parador is a modern, luxury, four-star property with 149 guestrooms, spa, swimming pools, and dedicated meeting spaces. Steps from La Caleta Beach, it is an up-to-the-minute oasis in an ancient port. 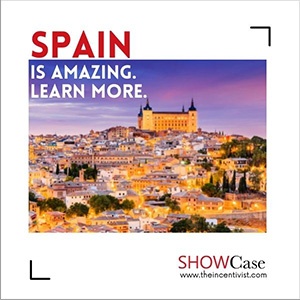 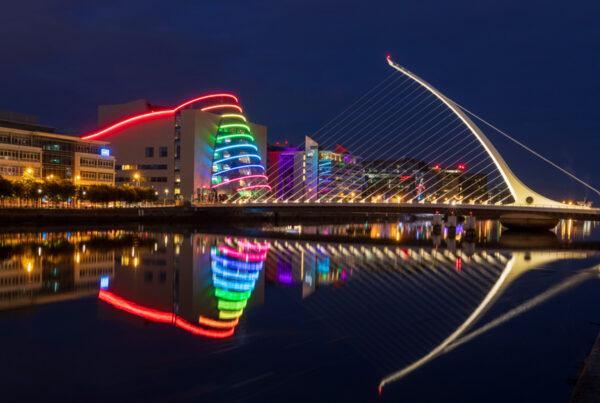 Why you should reconnect in Ireland for your next Corporate Event 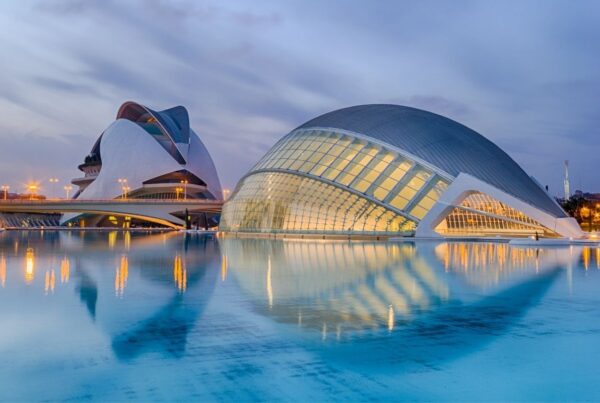 6 reasons to choose Spain for you next business event 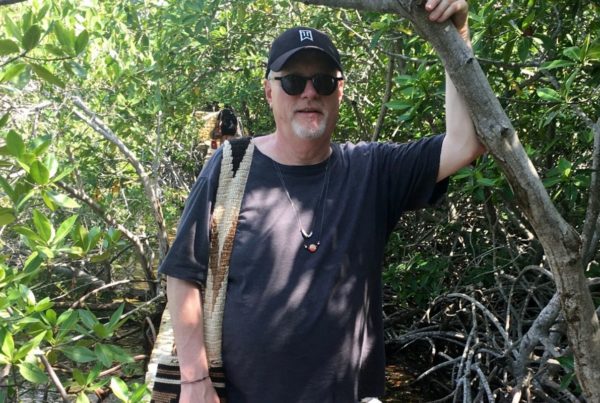